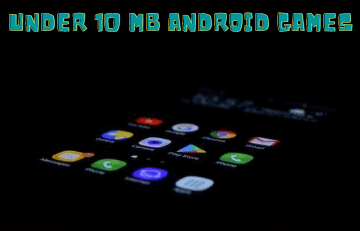 Gaming is one of the best ways to ward off your boredom, and playing games in smartphone devices is the most comfortable and convenient method.

But not everyone owns a high-end gaming device or maybe, you just don’t want those heavy games to consume your phone’s space. In both scenarios, using lightweight games for Android devices is the perfect option.

That’s why our team decided to create a list of 10 best android games under 10 MB.

All the games on this list are freely available on Google Play Store and have an excellent overall rating. Also, these games can smoothly run on any Android device with at least 512 MB of RAM.

So, without any further ado, let’s dive right in:

Modern Sniper is one of the lightest first-person shooting games available for Android smartphones. At almost 10 MB of size, the game offers realistic 3D graphics and visuals.

However, you cannot compare its graphics with other popular first-person shooting games like PUBG Mobile, or Call of Duty, but considering its size, I can say that it is the best in its segment.

In the game, you play as a sniper, and you will get your hands on six different unique locations, and seven different real-life snipers to choose from.

You can also upgrade those snipers using in-game currency to enhance its power. The game comes with more than 50 excellent crime shooter missions, which will engage you with the game for a longer time.

If you love playing first-person shooting games, it can be the best game for you under 10 MB.

Mekorama is one of the top-rated mobile puzzle games developed by Martin Magni. The premise of this puzzle game is straightforward – you have to help a tiny cute robot to build his home.

You can control that robot, and then you have to solve each level’s puzzles so that you can progress further in the game. Your goal in each level would be to find a square having a red dot on it. But for that, you have to conquer a lot of difficult hurdles assigned to each level.

Initially, you get a 50 level of puzzles, but you can unlock more after completing these. The game’s initial levels are elementary and easy, but when you progress in the game further, the game will become more complex and challenging.

The graphics of the game are very attractive and make it a good puzzle game under 10 MB. SWAT is yet another first-person shooting game in our list that comes with some compelling graphics. At a size of just 11 MB, they are offering top-notch 3D graphics.

The control mechanics of the game is also very easy to use. In the game, you will play as a part of the SWAT team, and you have to defeat terrorists.

The game contains so many real-life weapons and multiple locations. The more terrorists you kill, the more levels you will unlock.

It also supports an upgrade system where you can upgrade your weapons to improve accuracy and damage. The audio and visual effects are top-notch.

Dr. Driving is a car racing simulation game. The game has over 10 million downloads and holds a stunning 4.2-star rating on Google Play Store.

The game is so easy that even a newbie can understand it within a few minutes. The game features an online mode, too, where you can compete with other players worldwide.

The graphics of the game are excellent. The game also features multiple challenging levels, such as broken break, time trail, fuel, draft, etc. You have to complete the levels by following the instructions allied with each level.

The levels look very easy, but it is tough to complete. If you are looking to kill your boring time with any simulation game, then Dr. Driving can be a perfect choice for you. If you love playing puzzle games such as Tetris, Connect-four, or Candy Crush, then 7X7 is a perfect game under 10 MB. The gameplay is very easy but so addictive as well.

In the game, you have to make vertical, horizontal, or diagonal rows or squares of the same color. If you do that, it will remove the entire square or row, giving you points and clearing the grid.
As a player, you must have to stop the grid from filling for as long as possible.

The game’s entire concept is straightforward, and anyone can comprehend the gameplay within a few minutes. The game’s total size is just 2.1 MB, which is perfect for all older and new smartphones.

Powerline.io is an arcade game based on the old concept of classic snake games. The game is so fascinating and highly addictive. If you are looking for a small-sized game to ward off your boredom, then Powerline.io can be a perfect choice.

The premise of the game is straightforward – you have to eat gems and score the highest points in the lobby. But in the meantime, you must have to protect your snake from biting other snakes and save your snake from colliding with itself or borders.

You will get two type control options – either you can go with swipes option or normal left or right turn. To speed up your snake, you have to get close and slither with other snakes.

The gameplay looks very easy, but the movements of other fellow players can make it a lot of challenging for players.

Break the prison is one of the most trending arcade games right now. The game has shown a sudden growth within a year, and it has been downloaded over 10 million times from the Google Play Store.

The premise of the game is very simple – you play as a prisoner who has been condemned to death for a crime that you have never committed. Now you have to ruminate and create a plan to escape from the prison.

You have to design and build some tools and then fool the guard to steal the keys from him. Once you have escaped from your cell, you will have to solve puzzles to find the escape route.

Die in 100 ways is an entertaining game with a subtle touch of horror and thrill. In the game, you will get a puzzle or task, and you have to accomplish it before the given time.

Otherwise, you will die along with other characters in the game. You play against Death, and you have to prevent the plan created by Death.

Death has made a few plans to reclaim all the in-game characters’ lives, but you have to destroy his plan and save all the characters. The game features over 24 stunning mini-games and very compelling graphics.

The game is tagged as a free-to-play game with some in-app purchases. If you are looking for a puzzle game under 10 MB, then I suggest you must give this game a try. In the game, you play as a caveman whose kid has been taken by the dinosaurs, and now, the caveman starts searching for his kid inside the World of Dinosaurs. In this epic journey, the caveman has to deal with so many wild dinosaurs.

After each level, you will get some coins that can be used to upgrade the armors. The gameplay is fascinating and highly addictive.

In the game, you ride a bike, and you have to take your bike as fast as possible. To control your bike left or right, you have to tilt your smartphone. You can also accelerate your bike by tapping on your screen.

But you have to ride your bike in traffic, which means you have to deal with so many vehicles. You have to keep a sharp eye on the indicator light of other vehicles to avoid accidents.

The longer you drive your bike without meeting an accident, the more you will score in it.

We have created this list of best games under 10 MB after testing hundreds of popular games.

If we forget to mention any of the games that you think should be on this list, feel free to share them in the comment section below. We will test out the game, and if we find it enjoyable, then we will consider adding that game on our list.

With that said, here I am wrapping up this article. I hope it was helpful to you. If you have questions, then shoot them in the comment section below. We will try to answer all your queries ASAP.