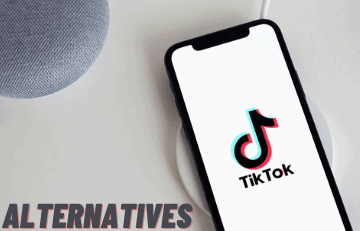 In this article, I’ve listed some of the best TikTok alternatives that you should try in 2022 if you are also from the TikTok-banned country.

Recently, the government of India banned TikTok along with 58 other Chinese-origin apps over some security concerns. Shortly after that, Google Play Store and Apple App Store removed all those 59 apps from their servers for Indian users.

At the time of the ban, TikTok was offering its services to almost 200 million Indian users. Many people thought that they can still access TikTok using a VPN, but sadly, such techniques are also not working anymore with TikTok.

Therefore, a considerable number of people started looking for other TikTok alternatives. If you are one of them, then you have landed on the right page.

Here I am going to share the ten best TikTok alternatives with you. You can pick any of these alternatives to replace TikTok.

10 Best TikTok Alternatives that you should try in 2022:

Chingari is another short video sharing platform locally made by Indians as a TikTok alternative. The app got a sudden boost in popularity after the ban of TikTok. Right now, the Chingari app boasts a considerable userbase of over 10 million Indian users. 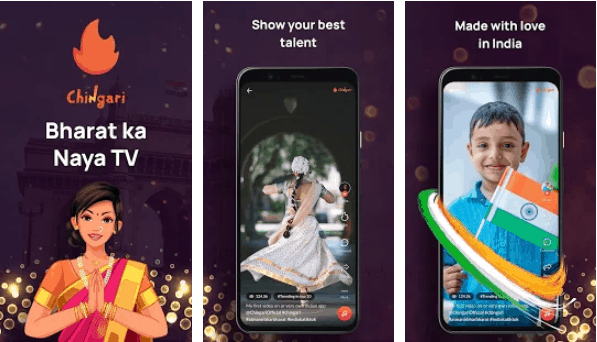 The app comes with multiple categories such as Trending, Memes, Shayari, and others that you can choose according to your mood. The personalization algorithm of the app is really excellent.

In the home feed, you only get suggested videos according to your view history. The UI of the Chingari app is just okay. It needs a bit of improvement, but the good part is, developers are working on it.

Unlike Mitron, Chingari is available for iOS and Android OS and is readily available on the App Store and Google Play Store. The app supports multiple local Indian languages that include Hindi, Marathi, Telugu, Kannada, and others.

You may also like to try these best Garageband alternatives.

Mitron is an excellent alternative to TikTok. It is a short video platform that grossed a considerable userbase across the globe. Within the first month of launch, the app reached the milestone of over 5 million downloads, and right now, the app has been downloaded over 20 million times.

Soon after the immense success, the app faced a lot of backlash because of having roots with Pakistan, and the app even got removed from the Google Play Store. But later, the founders clarified that they are following all local guidelines and laws designed by the Indian government. Due to this, the app returned on Google Play Store and is now freely available to use. However, the iOS version of the app is still missing.

The app came in the limelight after the “Boycott Chinese” movement and is mainly targeting Indian users. The app features multiple video editing options, seamless UI, and tons of excellent functions. If you are an Android OS user, then the Mitron app can be an excellent TikTok alternative.

MX Takatak is another Indian origin app designed by the team of MX Media and Entertainment. It let users create 15 seconds to 2 minute long videos and share them on social media platforms. 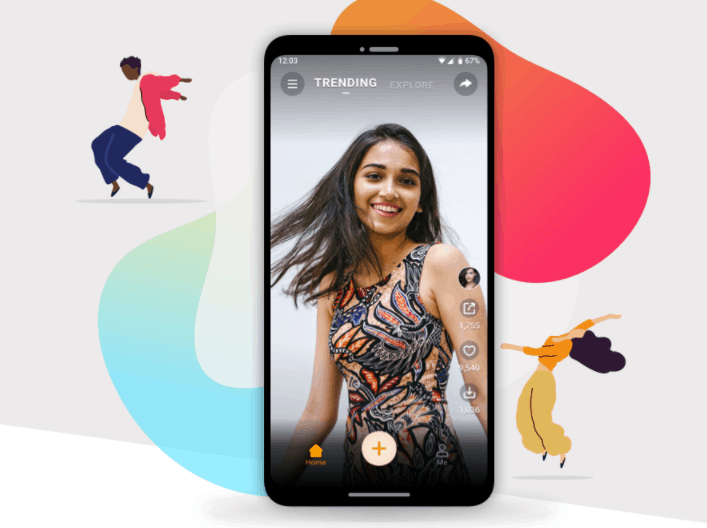 You can create and watch different types of videos on the platform, ranging from comedy, lip-synch of dialogues and music, DIY, memes, and many others.

The app comes with a similar user interface to TikTok, making it easily accessible by old TikTok users. The app had been introduced among users amid the growing buzz of “Made in India” replacement for Chinese origin apps, and it performed very well in Indian markets. It boasts around 10 million active installs, which is pretty much satisfying for any developer.

The app is available for both Android and iOS devices, and you can easily download it from Google Play Store and Apple App Store. It also supports multiple Indian languages such as Hindi, Tamil, Kannada, Punjabi, Marathi, Gujrati, and others along with English.

Dubsmash is a prevalent TikTok alternative app that has been in the market for a very long time. They made their debut in 2014, and since then, they are offering their services to over 100 million users across the globe. Dubsmash mainly targets users who love lip-synch videos with dialogues or music songs, but you will surely get a bunch of different options. 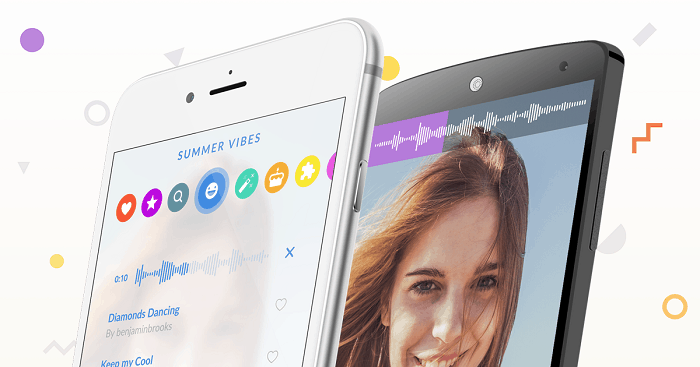 The user interface of the app is immaculate and looks very attractive. Additionally, it features many excellent video editing options that you can use to make your videos more visually appealing and entertaining.

The Dubsmashapp maintains a stunning rating of 4.7 stars on the App store and 4.2 stars on the Google Play Store. It is also available in 20 different international languages, along with Hindi and English. Like TikTok, it also lets you follow other creators, so that you can see future videos created by them.

Roposo is yet another Indian origin alternative to TikTok. They initially released their platform in 2014 and showed stable growth, but recently, the TikTok ban immensely boosted its popularity among Indian audiences. Right now, the platform has over 50 million monthly active users. 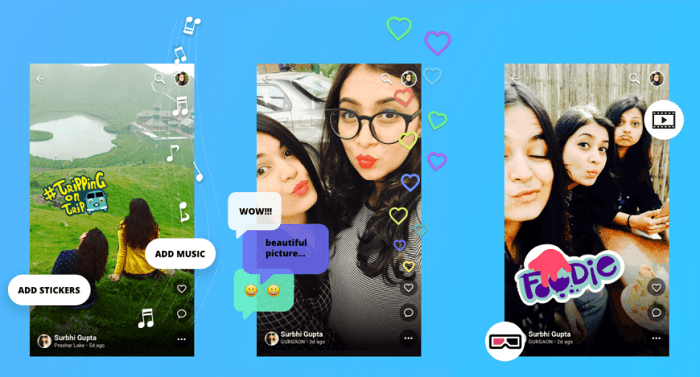 The user interface of the platform is very eye-catchy and clean. You can use Roposo to create and edit short videos and share them among your friends on social media.

It allows you to record videos in multiple modes such as slow-mo, portraits, timelapse, etc. It also features 100s of excellent filters that can make any boring video much attractive and appealing.

The app supports 20 different local Indian languages, including Hindi and English. It is also available for both Android and iOS devices, and its native app for both OS can be downloaded from their respective app stores.

It is a recently launched TikTok alternative that received decent attention among Indian users. It is a redesigned version of the Vine app that helped short video platforms in India. Although the app is available on the Play Store for a long time, it has seen a sudden growth in downloads after the TikTok ban. 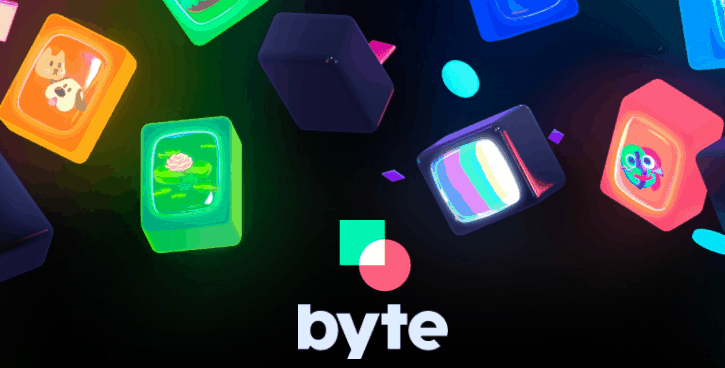 The best thing that impressed me about this app is that it features multiple subcategories: funny, memes, cinematic, and many others. You can scroll through those subcategories to consume related video content. It works precisely similar to Reddit’s subcategories feature.

The Byte app is available for both iOS and Android devices and can be easily downloaded using the App Store or Google Play Store.

Triller is a short video sharing platform designed and published by the team of Triller LLC, NY. It was initially launched in 2015 by David Leiberman, and since then, they are attracting global users. Right now, they boast a massive Indian userbase of over 40 million Indian users.

The video-sharing platform allows its users to create and edit high-quality professional-looking videos within minutes. They feature over 100+ excellent filters that you can use to edit your videos. You can create and share different types of videos, such as lip-synching, dancing, comedy, and others.

It is available for both Android and iOS devices. Additionally, it supports 30 different international languages, including Hindi and English. If you are looking for some trusted TikTok alternatives, then Triller is the best option for you.

The next TikTok alternative on our list is Boloindya. The app is designed by SynergyByte Media Pvt Ltd, which is a Gurugram, Haryana based company. They came as a TikTok replacement after the Government of India issued a ban on TikTok, and they managed the market pretty well. 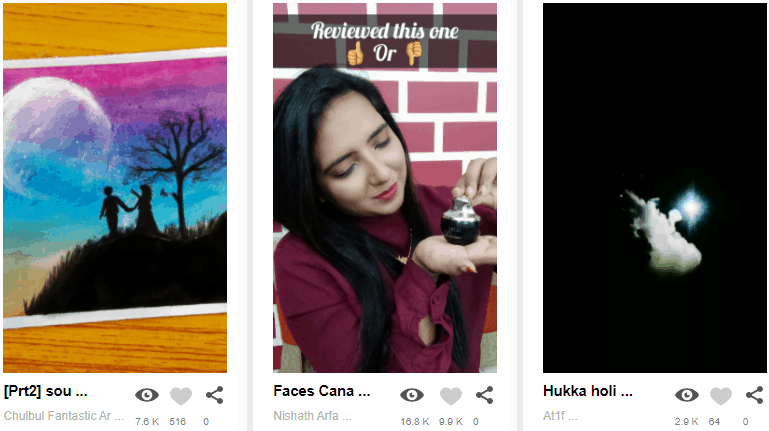 Right now, they have over 10 million monthly active users, which they gained in just the past six months. The platform lets you create, edit, and share short videos in local languages of India such as Hindi, Marathi, Tamil, Telugu, Punjabi, Odia, and others.

Users can create and share videos in different categories, such as Funny, Health, Motivation, News, and others. The app allows you to use 80+ excellent filters and multiple video editing tools.

The app supports various local Indian languages, including Hindi, Tamil, Marathi, and others. The community of Bolo Indya, who loves to watch short videos, is growing at a good pace. They are only targeting Android users, and their app can be downloaded directly from Google Play Store.

Funimate is yet another top-rated app that you can use as a TikTok replacement. Although it provides a video-sharing platform, people are mainly used to editing their videos. The app has over 40 million monthly active users who use Funimate to edit videos for multiple social media platforms. 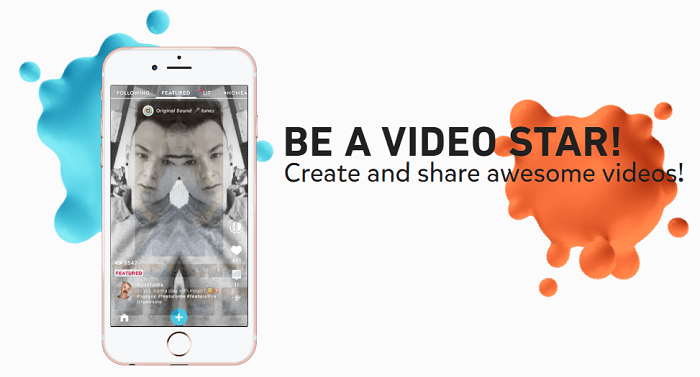 It comes with a very clean and easy to use interface. It let you use over 100+ top-notch video effects like slow-mo, lip-synch, lyrical video, and others to edit your videos.

Additionally, you can also create your own effect that you can use anytime on your videos. With these effects, you can create awesome professional-looking videos within no time.

The app is designed for both Android and iOS devices and can be easily downloaded from their native app store. If you are looking for a TikTok alternative to edit your videos, then Funimate can be the right choice for you.

Last but not least, Josh is another Indian origin TikTok alternative that you can use on your Android devices. It is a very lightweight app that sizes almost 9 MB, making it an excellent option for older smartphones. The app allows you to edit and share different types of videos on various social media platforms. 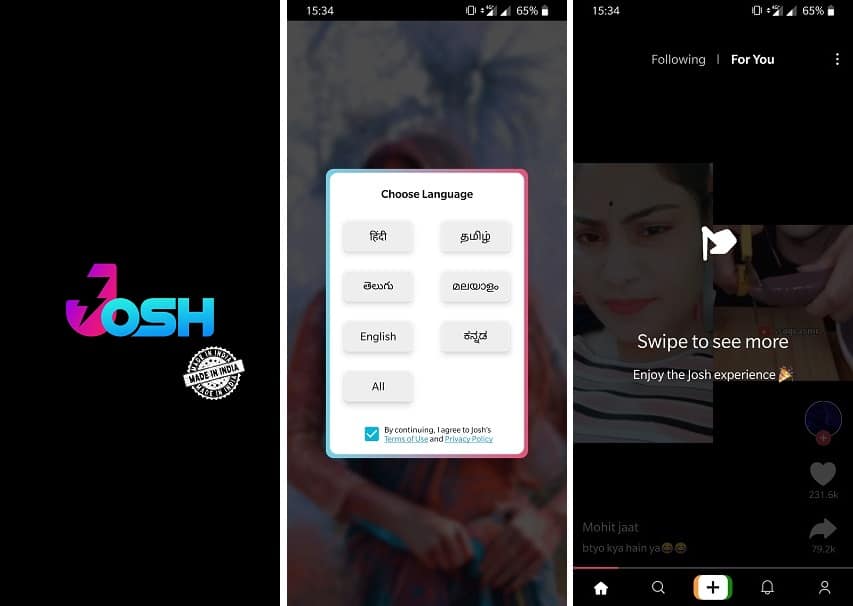 The app has over 10 million active Indian users, and they have achieved it within six months only. You can use the platform to share your talent to get famous among people.

The app is mainly targeting Indian Android users, and that’s why they only have their app designed for Android devices. It also supports multiple Indian languages. Overall, it is an excellent Indian TikTok alternative that you can use.

So, this was all about the top 10 best TikTok alternatives.

However, each of them comes with a different set of features that makes them different than others. You can use any of them to show up your talent and become famous among people.

With that said, here I am wrapping up this article. I hope this article helped you to find some best TikTok alternatives. If you have any questions, feel free to share them with us using the comment section below—our team will try to respond to them ASAP.